Among the poor – in the Eucharist

By the prayers and example of Saint Katherine Drexel,
enable us to work for justice
among the poor and the oppressed,
and keep us united in love
in the Eucharistic community of your Church…

Today is the feast of Saint Katherine Drexel, daughter of a rich Philadelphia banker. But, with his example of daily prayer and the example of her step-mother who served the poor three times a week in her home, she developed a faith that strove for justice. 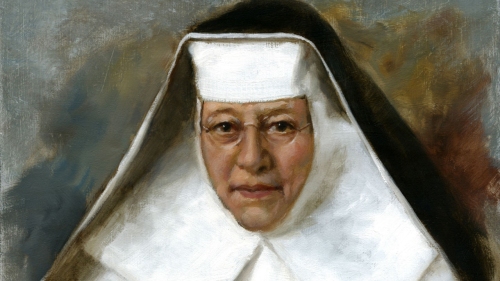 Alarmed at the poverty and oppression among Native Americans and African Americans, she asked the pope to send missionaries. His response was to the point, “Why not become a missionary yourself?” She did and founded the Sisters of the Blessed Sacrament.

This morning, the prayer for her feast day noted above, struck me.

We ask to be enabled to work for justice among the poor and the oppressed – not for them, but among them. This is a struggle with them, taking part with them – not as leaders, but accompanying them.

It is also a prayer to keep united in love, in the Eucharist. Mother Katherine Drexel had a deep devotion to the Eucharist. The Eucharist is the presence of Christ uniting us in love with all people.

Justice and the Eucharist – two dimensions of the holiness of Saint Katherine.

Justice among the poor and Eucharist in union with the whole Body of Christ – these are for me, especially as a deacon, the central dimensions of my life.

The image is taken from an article in Franciscan Media, found here.

Good news for the poor

Today the Catholic Church in the US honors Mother Katherine Drexel who died in 1955 at the age of ninety-six. She founded the Sisters of the Blessed Sacrament for the care of “Indians and Colored People,” in the terminology of her time.

When I was a kid rowing up in Darby, a suburb of Philadelphia, I remember her sisters coming to Mass at our church as part of a mission appeal, asking for funds but also asking us to pray for her canonization.

Although she was born to a wealthy family and inherited an incredible fortune, when she founded her order she made the decision that her fortune would be used for others and that her sisters would beg for money.

With her fortune she founded schools and institutions for Native Americans and Black Americans, including helping fund the founding of Xavier University in New Orleans, the first Catholic institution of higher learning for Black Catholic Americans.

Though she was not known as an outspoken advocate of justice, she did speak out against segregation and her sisters working in Harlem were maligned for their identification with Blacks.

She is an example of a person who came from a position of wealth and power but gave not only her wealth, but her life, for those on the margins of society.

She was inspired by her father and her stepmother, who opened the doors of their mansion three times a week to feed and help the poor.

What I find inspiring is that, though she controlled and distributed hundred of thousands of dollars each year, she used none of it for herself or for her congregation of sisters. It was all for others.

She took seriously the phrase from today’s Gospel, “The greatest among you must be your servant.” (Matthew 23: 11)

She sought to be Good news for the poor, in the ways she could. As she once said:

“If we live the Gospel, we will be people of justice and our lives will bring good news to the poor.”

How will I be a person of justice and peace and good news for the poor? How will I dispose of my wealth, compared to the people around me, to be a sign of God’s love for those at the margins? How will I live the Gospel?

Today’s Gospel (Mark 10: 17-28) should challenge us, but so often we think that it is only a challenge for the rich young man who came to Jesus seeking to know how to inherit eternal life.

The disciples realized it was challenge for they were amazed and astonished when Jesus noted, “How hard it is for the rich to enter the Kingdom of God.”

All those of us who don’t have to worry about our physical survive are in some sense rich. One liberation theologian has said that the poor are those who wake up each morning and have to ask if they will have enough to feed themselves and their families.

The lives of the poor are insecure – and thus they show us the reality of this world, the pain and suffering of the poor and marginalized.

And so we are asked to sell what we have, give the money to the poor, and follow Christ.

Following Christ has everything to do with how we deal with money.

A great example of this is today’s saint, Mother Katherine Drexel. She was born into a rich Philadelphia Catholic family. Her mother died when she was a few weeks old, but her step mother, Emma Bouvier, gave her an example of charity. Three times a week, the Drexel home opened its doors to feed, clothe, and give money to the poor.

That gesture of charity opened Katherine’s heart to the poor.

But she did not confine her love to Catholics or poor city dwellers.  In her travels with her family throughout the US, she saw the poverty and the discrimination against native Americans and black Americans. She finally founded a religious order, the Sisters of the Blessed Sacrament, to care for them.

But even though she inherited great sums of money, none of the money was used for her congregation. It was used to assist works with native and black Americans. This included the founding of missions, schools, and New Orleans’ Xavier University.

The poor at the margins were her concern – as they are the concern of the Lord.

Mother Drexel’s heart was open – and she followed the poor Christ, by sharing with the poor.

What am I called to do?