Bearing the marks of Jesus

May I never boast in anything,
except in the cross of our Lord Jesus Christ,
through which the world has been crucified to me,
and I to the world…
I bear the marks [stigmata] of Jesus on my body.
Galatians 6: 14, 17

Today the Franciscans celebrate the Stigmata of St. Francis of Assisi. 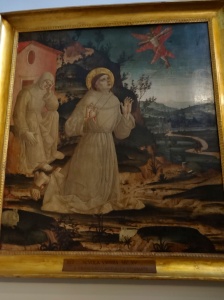 In 1224, sometime around the feast of the Holy Cross (September 14), Francis was praying and fast on Mount Alverna. He witnessed a seraph, with the crucified Lord. After this his body was marked with the five wounds of Christ.

Much has been written about this first manifestation of the stigmata, the wounds of Christ. The discussion on Francis’s stigmata in Andre Vauchez’s Francis of Assisi: the life and afterlife of a medieval saint is very informative.

It is easy to get fixated on the physicality of Francis’ wounds or on the way that these make him into “another Christ.” But as St. Bonaventure  wrote, “it was not the martyrdom of his body but the love burning in his soul that was going to transform him into the likeness of Christ crucified.” It was the love of the incarnate and crucified Lord that transformed Francis.

In trying to understand Francis and the Stigmata, I have found Lawrence Cunningham’s Francis of Assisi: Performing the Gospel of Life extremely helpful.

He sees Francis as “more a performer of the Word of God than a commentator upon it… It would not be too audacious to say that the stigmata were a kind of writing on the body of Francis – a kind of reversal or mirror image of the passion story.”

Cunningham situates the imprinting of the stigmata on Francis in relation to the Christmas celebration of the previous December where Francis enacted the birth of the Lord in a cave at Greccio, seeing these as “two parentheses that summed up the evangelical vision of Francis.” These events reveal the deeply incarnational vision of Francis, as he sought to live out the life of his Savior.

The Pauline emphasis of identification with Christ [Galatians 6:17] as well as the gospel theme of the following of Christ [Matthew 16: 24] is evident in the life of Francis through his desire to follow the poverty of Christ from his poor birth in a stable through his desolation on the cross.

In contrast to the debates about literal poverty among the early Franciscans, Cunningham suggests that we look at how Francis saw poverty:

as a self-emptying whose meaning had to be anchored in the reality of the gospel message whose center is the cross. That self-emptying began, of course, when the Word became flesh, when the Son of God was born of Mary in a simple stable in Bethlehem.

And so, what are the marks of Christ we should bear on our body?

Not the physical stigmata, but the love of Jesus God made flesh in the poor man of Nazareth and the identification with those at the margin as Jesus did.

That is perhaps the best way to follow Christ – and to remember Francis of Assisi.

The  painting, from the 15th century Umbrian School, is in the Vatican Museum.