Banqueting with the poor

When I was working in campus ministry and social ministry in the parish of St. Thomas Aquinas in Ames, Iowa, one of our ministries was to bring meals on Fridays to the local homeless shelter. Parishioners and students would go to cook meals at the shelter and I would join them a few times a year.

In the 1990s we began a student service and justice team to lead various service activities in Ames and nearby communities. They met each week to prepare upcoming activities, but also to reflect on their experiences in the light of their faith. It was probably the closest I’ve ever come to a base community in the US – combining prayer, reflection of scripture, fellowship, and service to the poor.

I insisted that they went to eat with the poor, not merely prepare food for them. They would meet at the student center, decide on a menu, go to buy what was needed at a grocery store, and then go to the shelter and prepare it in the kitchen. Then they would sit down and eat with the residents

I am convinced that this changed the lives of many of them, as they sat around the table with the men, mostly homeless wanderers, and shared stories.

One of our service and justice team members, Maria Lux, painted her memory of one of those meals. The painting hangs at the Emergency Resident Project in Ames. 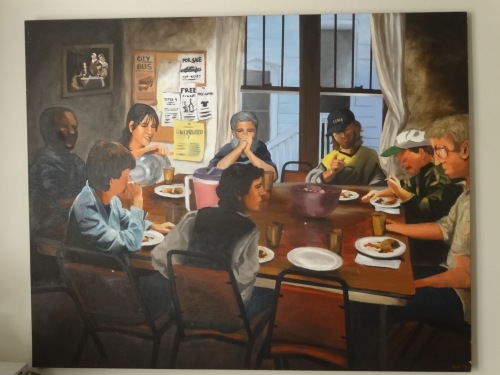 What strikes me is that these students had an opportunity to meet the homeless as real persons, with stories of joys and sorrows, of success and failure. The poor were not a group; they were Joe, Harry, Marty. Eating beside these men, the students could recognize the bonds between them.

This is a hard message for me, and for many of us. We prefer a disembodied charity and an advocacy of justice from above. Getting our hands dirty with the poor, eating and speaking with them are hard. But I think this is what God wants.

I write this on Saturday, August 31, the anniversary of the death of John Leary in 1982 at age 24. I met John a few times at Haley House, the Catholic Worker House in Boston. He came to Boston to study at Harvard, but he found himself working with the poor, sometimes sharing his room with them. He was an advocate for peace, protesting and being arrested two times at a Boston weapons lab. He lived the seamless garment, also being arrested once at an abortion clinic. He worked at the Pax Christi Center for Conscience and War with Gordon Zahn. He embodied the love of the poor, the advocacy of a seamless garment of life, and a nonviolent life. But he was also a man of God. One of his prayer was praying the Jesus prayer as he jogged. He died, jogging home from the Pax Christi Center to Haley House – probably with the words of the Jesus prayer on his lips.

He had given his life, as a banquet for the poor.

May we find ways to eat at the table with the poor, making ourselves friends with the poor. As Paul wrote to the Romans (12:16):

“do not be haughty but associate with the lowly”

Be not conformed to this age,
but be transformed
by the renewal of your understanding.
Romans 12: 2

In today’s Gospel, Matthew 16: 21-27, Jesus calls Simon Peter “Satan,” the adversary, the one who plots against the Lord. Peter wants to block the way of the Cross.

For Peter is thinking – or better, reasoning – not as God does, but as humans do.

We look for advantage, for ways to get ahead, to be in control.

But Jesus transforms the world by giving us a new way of thinking – a way of giving oneself.

Today I recall two people who died on August 31 – one from the US, John Leary, who died in Boston in 1982; the other an Ecuadorian bishop, Leonidas Proaño, who died in 1988. I wrote about them in a blog entry last year, which can be read here.

I met John Leary several times at Haley House in Boston. What always struck me was his simplicity, his lack of arrogance. He was actively engaged in resistance to MIT’s nuclear weapons lab, to abortion, to military intervention – but I never saw the self-righteousness I have seen in some activists.

It was probably his life of prayer, his opening his room to the poor, his service to those in need that kept him grounded.

If no one told you, you would not know that he was a graduate of Harvard University. For him, that was not important.

He was a person who was not conformed to this age but had allowed himself to be transformed by Christ and the poor.

May God transform me.

A church of the poor

Regarding fraternal love (phladelphia)
you do not need anyone to write you,
since God has taught you to love (agape) one another.
1 Thessalonians 4, 9

Today is the feast of St. Aidan, the Celtic bishop of Lindisfarne, as well as the anniversary of the death of two twentieth century witnesses to God’s love ifor the poor:  Monseñor Leonidas Proaño of Riobamba, Ecuador, and John Leary of Boston.

There is a story that reveals St. Aidan as “most compassionate, a protector of the poor and a father to the wretched.” King Oswin gave him a horse, which St. Aidan gave to the poor, with all its fancy trappings. Oswin was upset and suggested that there were less valuable horses which could be given away to the poor. But Aidan replied, “What are you saying, your majesty? Is this child of a mare more valuable than this child of God?”

One of the prophetic bishops of Latin America, he lived and served the church with a deep love for God and for the poor, which showed itself in a struggle for justice, in particular in solidarity with the indigenous.

He once wrote a creed, which I read in Carta a a las Iglesias  many years ago. My translation follows:

Above all, I believe in God.
I believe in God the Father.
It is he who has given me life.
He loves me infinitely.
I believe in Jesus Christ, the Word of God made flesh.
According to God’s plan, he became poor,
lived among the poor and preached the Good News to the poor.

Therefore, I can also say that I believe in hope.
And for the same reason, I believe in justice.
I believe in reconciliation,
and I believe that we are walking toward the Kingdom of God.

I believe in the poor and the oppressed.
I believe that they are tremendously capable,
especially in their ability to receive the salvation message,
to understand it, and to put it into practice.
It is true then that we are evangelized by the poor.

I believe in the church of the poor
because Christ became poor.
He was born poor, he grew up in poverty,
he found his disciples among the poor
and he founded his Church with the poor.

A tribute to Monseños Leonidas Proaño can be found here at the blog Iglesia Descalza.

John Leary died on August 31, 1982, at the age of twenty-four, jogging to his home at the Haley House Catholic Worker from his work with the Pax Christi Center on Conscience and War.

His short life was given to service of the poor at Haley House as well as nonviolent witness against war, nuclear weapons, the draft, and abortion. An unassuming young man, he radiated respect for others – as well as a profound commitment to the God of peace and the poor God made incarnate in Jesus.

I met him several times. I only wish I had taken to time to know him more.

These three men, from different continents, show us a bit of our vocation to be a poor Church and a Church of the poor (and not only for the poor).

Thirty years ago a young man named John Leary died on the Boston Common while jogging home from work. But he was not an ordinary young man.

I met him a few times at Haley House, a Catholic Worker house, in Boston where he lived and worked among the poor. A bright young man – graduate of Harvard – he was a light in many ways to the darkness around the world in the early 1980s. He had a great spirit that you could experience meeting him.

His life was grounded in an active commitment to the poor, serving them, but he also a strong advocate for life. He co-founded and worked at the Pax Christi Center on Conscience and War.

He was a member of the Ailanthus Resistance Community and was arrested for protests against nuclear weapons at a local laboratory. He also was arrested several times protesting abortion.

He was a truly consistent advocate of life.

But there is another aspect of his life which intrigues me.

John Leary began to participate in the Melkite Catholic Church and was, I presume, influenced by Eastern Christian spirituality.

He used to run on his way to and from work at a center for Pax Christi Center on Conscience and War in Cambridge). Gordon Zahn, a co-founder of the center, asked John about his running, which seemed so mundane and boring. John replied that he prayer the Jesus prayer while running.  In all probability, on August  31, 1982, while running home to the Catholic Worker John died, praying the Jesus Prayer.

It is a prayer that nourishes me.

Today, remembering John Leary, I pray that like him my life may be a witness to the God of life who became poor for us, by living and working with the poor, rooted in God’s love. And may I die with the Jesus prayer on my lips.