Fear and the innocents of Aleppo

“Fear kills you,
and you kill them.”
St. Quodvultdeus

Today is the feast of the Holy Innocents, remembering the children killed by Herod’s troops in Bethlehem. Some early writers talked of several hundred children, but it may have been only between six and twenty-five. But the death of every innocent – by war, by abortion, by terror – should cause us to grieve. But…

In a homily on the Creed, cited above, St. Quodvultdeus (whose name means “what God wills”) addresses King Herod, reminding him that the fear that moved him to kill the innocent is killing him from within.

Fear is at the root of Herod’s rage which moves him to kill the Innocents of Bethlehem, in his effort to kill Jesus, the newborn king. As Robert Ellsberg puts it so succinctly in All Saints,

It is the constant fear of every tyrant that somewhere, perhaps in an obscure village, perhaps at that very moment, there is a baby born who will one day signal the end of his power.

Fear kills something in us and moves us to kill, to consider the Other as enemy, as a threat to my power, to my existence.

That, too, is the point of one of Thomas Merton’s most pointed essays in New Seeds of Contemplation, “The Root of War Is Fear,” an essay which merits prayerful reading in these days.

At the root of all war is fear: not so much the fear men have of one another as the fear they have of everything. It is not merely that they do not trust one another; they do not even trust themselves. If they are not sure when someone else may turn around and kill them, they are still less sure when they may turn around and kill themselves. They cannot trust anything, because they have ceased to believe in God.

Fear consumes us. I see it consuming the people around me. I observe, from a distance, the fear that seems to be consuming people in the US.

And so war rages around us.

We fear for our lives and safety and so innocent children suffer, especially the innocents in Aleppo, Syria.

The foreign policies of Russia, Syria, the United States and many other countries are based in fear and so they rely on bombs, drones, and weapons of mass destruction (nuclear and otherwise) to seek security.

But we have let fear consume us. And so the children suffer.

There is an image by Judith Mehr going around the internet these days , entitled “Omran,angels are here,”which has at its center a child wounded in Aleppo, surrounded by three angels, who remind us of the three angels who visited Abraham.

Who will be the angels that comfort the children, the mothers, the victims of bombings? 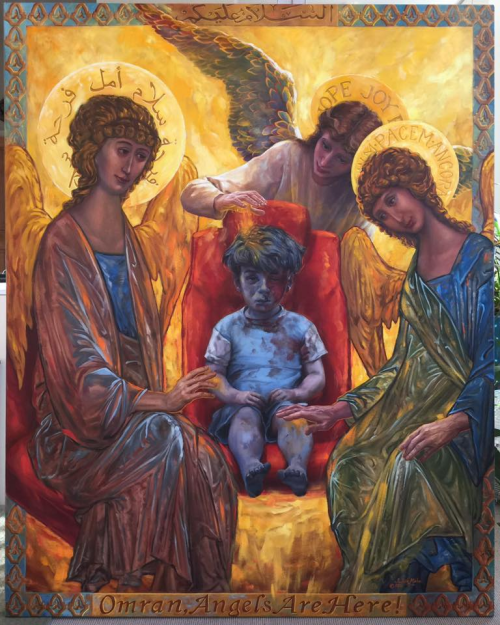 Since the children share in blood and flesh, Jesus likewise shared in them,
that through death he might destroy the one who has the power of death,
that is, the Devil,
and free those who through fear of death had been subject to slavery all their life.
Hebrews 2: 14-15

This passage from the Letter to the Hebrews, which I was surprised to see is today’s second reading, fills me with hope.

Fear of death does not need to enslave us. That is the message of Christ’s death and resurrection.

I see so much fear in our world.

Here in Honduras I hear the fear of gangs and crime that people in the big cities express (and that is found in the US State Department warnings about travel to Honduras – and also El Salvador). I hear it in the concerns of people around me about crime, violence, poverty, and more.

I have noted that fear in what I have been reading about the presidential campaigns in the US, especially expressed in fear of the Other – Syrians, Latin Americans, and more.

But I recall the beautiful essay of Thomas Merton in New Seeds of Contemplation, “The Root of War is Fear.”

At the root of all war is fear: not so much the fear men have of one another as the fear they have of everything. It is not merely that they do not trust one another; they do not even trust themselves. If they are not sure when someone else may turn around and kill them, they are still less sure when they may turn around and kill themselves. They cannot trust anything, because they have ceased to believe in God.

But today in the Gospel (Luke 2: 22-40), Simeon tells Mary that her Son is the Light of the nations but that he is also a sign of contradiction that will cause a sword to pierce her heart.

How can we go beyond the fear of death, how can we be freed from that fear?

Perhaps it means taking seriously the words that the Jesuit priest Alfred Delp wrote from a Nazi prison, especially the words he italicized:

The fate of mankind, my own fate, the verdict awaiting me, the significance of the feast, can all be summed up in the sentence surrender thyself to God and thou shalt find thyself again. Others have you in their power now; they torture and frighten you, hound you from pillar to post. But the inner law of freedom sings that no death can kill us; life is eternal.

Lord, free us from the fear of death and bring us to love.

When King Herod heard this,
he was greatly troubled, and all Jerusalem with him.
[The Magi] were overjoyed at seeing the star.
Matthew 2: 3,10

When Herod heard of the birth of Jesus he was filled with fear and his fear contaminated the whole city. Not finding out where the Child was, he sent troops from afar to try to kill him.

When the Magi saw the star they were overjoyed and, entering the house, adored the child Jesus. 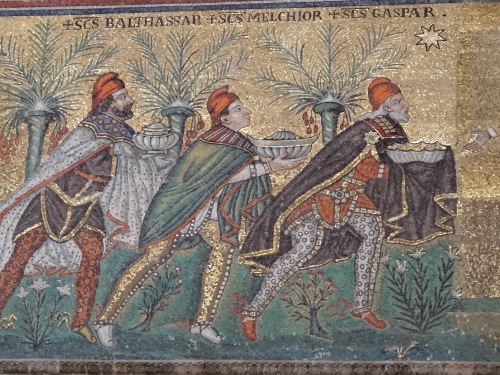 Herod in fear sought death; the Magi, filled with joy, share their gifts.

What will we choose today: fear and death-dealing or joy and sharing?

That may be the real question for the Epiphany.

Fear and the Innocents

It is the constant fear of every tyrant
that somewhere, perhaps in a obscure village,
perhaps at that very moment,
there is a baby born who will one day signal the end of his power.
Robert Ellsberg,  All Saints

Today we remember the Holy Innocents, the male children two years and under who were killed by Herod’s troops, told only in Matthew’s Gospel. Herod was threatened by the report of the Magi of the newborn King of the Jews. In fear and rage he responded with what the powers of this world always have at their disposal – death.

Tyrants and all those who seek to hold on to control are threatened by the new and react in fear. As St. Quodvultdeus said in a sermon:

You destroy those who are tiny in body because fear is destroying your heart.

Fear destroys others because it destroys the person who fears. Fear pales in the face of uncertainty and the lack of control. Fear keeps us from welcoming the newborn king of the Jews.

About 1965, Emily Sargent Councilman wrote a short poem that, perhaps, shines some light in the darkness of the death of the innocent:

The Herods of the world,
fearful for their power,
send soldiers
to slaughter
innocents.
The Caesars of the earth
dispatch armies
to implement decrees
for conquest
and taxes.
But the God
above all governors
came himself,
his armor and his purpose:
love.
We have read the pages
of centuries.
When
will we dare
to write
peace?

Fear, joy, and a disarming God

I live in the second poorest country in the Americas with the highest homicide rate in the world.

But why do I find myself full of joy and at peace here?

This morning’s psalm 46 from Morning Prayer of the Liturgy of the Hours may provide a clue.

As I prayed it – first in Spanish and then in English – I noted that the three strophes have different but related themes. Here are some initial thoughts, that will be my day-long meditation.

Fear is so debilitating; it isolates us and keeps us from really living. It turns the other person into a threat to my existence.

There are lots of things to fear – crime, being rejected, death, sickness, bugs. These paralyze us and keep us from seeing the goodness of people and of God’s creation. But God is our refuge.

God is so gracious and the source of joy. I have been blessed with a smile and have inherited a hearty sense of humor from my Dad. Even in the midst of pain and injustice, God has let me see the marvels of God’s love – the beauty of creation, the holiness and love of the poor I work with.

3. God is a disarming God

“Consider the works of the Lord…. He puts an end to wars over all the earth; the bow he breaks, the spear he snaps; he burns the shields with fire.”

God not only dismantles the weapons of offense – the bow, the spear, the bomb, the machine gun; God burns with fire our defenses: shields, locked gates, barbed wire fences.

God calls us to be vulnerable, to be open. It’s not easy – and I always want some protection, some “security” precautions.

The end of the third strophe makes it clear:

In stillness we can learn that God is, that I, John, am not god, that God is our strength – even in our weaknesses.

And that brings me joy.

Mohandas K. Gandhi (the “Mahatma” – the great-souled one), was assassinated India, on January 30, 1948. Since I first read some of his writings in the 1960s I have been moved by his call for courageous resistance to injustice. This is no easy call – but I think it’s part of our call as humans, especially as followers of the nonviolent Jesus:

“Just as one must learn the art of killing in the training for violence, so one must learn the art of dying in the training for nonviolence. Violence does not mean emancipation from fear, but discovering the means of combating the cause for fear. The votary of nonviolence has to cultivate the capacity for sacrifice of the highest type in order to be free from fear. He reckons not if he should lose his land, his wealth, his life. [Whoever] has not overcome all fear cannot practice nonviolence to perfection. The votary of nonviolence has only one fear, that is of God.”

As I re-read this quote, I recalled Thomas Merton’s remarkable essay, “The Root of War Is Fear,” found in his  New Seeds of Contemplation. As he wrote:

May the Lord deliver us from fear and give us the courage to speak truth to power, not counting the cost.