Today is the feast of Saint Francis de Sales, a Swiss bishop who pioneered a spirituality for lay people which emphasized patience with oneself and living God’s love.

Today is also the anniversary of the death of Sister Dorothy Marie Hennessey, a Dubuque Franciscan sister, who died in 2008 at the age of 94.

She was a remarkable little sister, a tireless advocate for peace and human rights. She took part in one of the walks for peace across the United States and continually protested against war in all its forms.

She was arrested several times, including an arrest at the age of 88 at the School of the Americas, protesting US involvement in Latin America.

In this she remembered the witness of her brother, Ron Hennessey, a Maryknoll missionary in Central America who lived under the oppression of the indigenous in Guatemala. (Ron’s witness is told in Thomas Melville’s Through a Glass Darkly: The U.S. Holocaust in Central America.)

Her persistence in witnessing for the poor and oppressed is a sign of how God uses all sorts of people to show His love and justice.

Today is also the anniversary of the death in 2011 of Don Samuel Ruiz, bishop of San Cristobal de las Casas, Chiapas, Mexico. A detailed homage can be found at Mex Files here.

He was a bishop totally devoted to the poor, especially to the indigenous in his diocese in southern Mexico, who called him Jtatic Samuel. Although despised by those in power he was asked to meditate during the Zapatista rebellion because he was probably one of the few persons the people trusted. He had spent his life with them and had risked his life many times.

He also was not always appreciated by the Vatican, especially for his efforts to promote indigenous deacons in the diocese. A coadjutor was appointed, Monseñor Raúl Vera, who ironically has become one of the most progressive bishops in Latin America and is now the bishop of Saltillo, Mexico.

Don Samuel was beloved by his people. I saw a manifestation of that love when I visited San Cristobal in late January 2012 for the wedding of a friend. His tomb, behind the cathedral’s main altar was decorated with flowers. 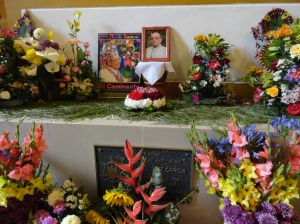 But he was more than a beloved pastor. He was a prophet.

Reflecting the words of Mary in her Magnificat, he once said:

The gentle strength and the strong gentleness of Sister Dorothy and Don Samuel offer us a way into living the Gospel, in solidarity with the poor.