The passing of Emiliano and the Good Shepherd

Yesterday in Plan Grande we sent Emiliano home to God.

Emiliano had been injured by electrocution several years ago and had been confined to his bed for several months. The pastor came at one point to anoint him and hear his confession. Communion ministers came regularly to share the body of Christ with him.

I met him first a few weeks ago when I went to preside at a funeral celebration of his father in their house.

Emiliano was so thin, emaciated, but at peace. “Me ha traido lo más especial”, he told me. “You’ve brought what is most special” – the Body of Christ.

After the funeral celebration in their home, I talked with his brother, who had cared for his father and his brother for years. He made sure they were fed and well taken care of. I later learned that he had been imprisoned for six years on false charges.

I was thinking about Emiliano yesterday morning. Then a son of my neighbor, Gloria, one of the Communion ministers, came and told me that he had died.

I found out later that he died in great peace. He had not been eating for several days and was suffering great pain, crying out when someone tried to move him. But Friday morning, he ate a little and then fell asleep. Waking up, he prayed, “Lord, have mercy, Lord,” and passed on to the Lord.

About 2 o’clock Gloria arrived and told me that the family was asking for a funeral. She was willing to do it but asked me. Though I really believe in avoiding gatherings, I said yes, but asked that there be careful spacing of people in the church.

I don’t have access to the English funeral rites, but in the Spanish liturgical book I have there is an invitation to prayer. In part it reads,

Each time I pray this over the body of someone who has died I cannot help sharing the beauty of one image – the one who has died being carried on the shoulders of the Good Shepherd. I often ask people to reflect on this image, how God loves us so much that he carries us. I sometimes encourage people to think of the deceased person being held in God’s arms, “chineado” as we say here in Spanish, a phrase often used in terms of a person holding an infant or a small child in her arms.

God carries us – on his shoulders or, as a mother, in loving arms.

Praying over the coffin of Emiliano, I rejoiced that God was holding him – and that Emiliano felt the love of God, even as, I believe, he felt that love in the midst of his pain.

May Emiliano rest in God’s loving arms – and may we remember this.

As if God continually tries to penetrate my heart, this morning I prayed Psalm 28. Verse 9 reads:

Save your people and bless their heritage;
Be their shepherd and carry them forever.

Be our shepherd, Lord, and carry us forever. 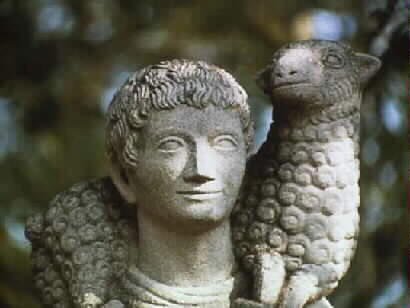 Image from the cemetery of Mount Saviour Monastery, taken from their webpage

In the face of death, celebrate

The two men celebrating birthdays were young men in their twenties. I had seen the spouse of one of them at Mass in Dulce Nombre before. They had been born two years apart and both were celebrating this week.

But the shock was that the deceased was their younger brother who had been murdered last week in one of the major cities of Honduras.

After the celebration I apologized for not being sensitive enough. But I told them to still celebrate – in the face of the murder of their brother. Then I said something like this.

I don’t know where these words came from, pure grace.  But the more I meditate on this the more I become convinced that the power of the Risen Christ and the celebration of life is central, a way not to let evil overwhelm us. For the powers of evil, “the principalities and powers” of this world, want to take away our hope.

Celebrating life is a powerful antidote.

The importance of praying always and never losing heart came alive for me this week.

This past week my prayers were dominated by concern for two friends and their newborn premature twins. One twin died soon after birth; the other struggled on for life for six days, finally falling asleep in the Lord last night.

I found myself astounded at the deep faith of Luisa and Jarrett whose prayer for their children left open the possibility of their passing on to the Lord. They had found the strength to pray, “Thy will be done.” I pray that God may continue to give them the comfort and courage they need.

But what also impressed me was the community of prayer and concern that arose. People were praying for them; people expressed their concern, their solidarity, their love. These are signs of the Reign of God.

I have been troubled by the bitter and abusive conversations in this election season. No, they are not conversations; they are accusations. They only provoke anger and fear and tear apart the fabric of a civil society.

But, in the midst of this, some of us experienced the presence of the God who brings people together – in love, in concern for the most vulnerable, in prayer.

Yes, the two newborns, Joseph and Matthew, have died, but a community of love was created around them and their parents and family.

May these types of communities grow and flourish – in the midst of times of fear and mistrust. May God be shown in our mutual love and support.

For this I pray – and, because of what I’ve witnessed in Luisa and Jarrett and the community that arose around them and their sons, now with the Lord, I have another sign of God’s presence to help me never lose heart.

A word of hope

In the middle of Lent the Church offers in today’s first reading, Isaiah 65: 17-21, a message of hope:  “I am about to create a new heaven and a new earth.” This seems so out of place in Lent.

But it is a message I needed to hear.

Yesterday, coming back from San Agustín with Padre German, we encountered cars stopped on the dirt road outside Caleras.

A man had been killed and his body lay in the middle of the road, a puddle of blood by his neck.

The police were there, keeping people away, and waiting for the fiscal – the public prosecutor – to come and verify the facts of the death.

We approached and looked on the dead man and then left to get to town by another route.

I was left with a great sadness – another person killed, another family grieving.

But Isaiah promises that in the new Jerusalem, “No longer shall be heard the sound of weeping or the cry of distress.”

That is the promise I needed to hear. A promise – but also a task for us here, and everywhere in the world where there is death and pain and suffering: to offer a word of hope.