Mary and the martyrs of Acteal, Chiapas 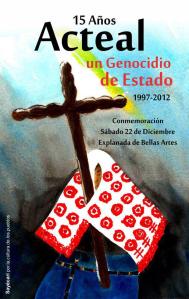 He has cast down the mighty
from their thrones
and has lifted up the lowly.
He has filled the hungry with good things,
and the rich he has sent away empty.
The canticle of Mary
Luke 1: 52-53

Fifteen years ago today, indigenous men, women, and children were gathered in the chapel in the town of Acteal, in the state of Chiapas in southern Mexico, praying and fasting for peace and justice.

A group of paramilitaries, connected with the governing political party of Mexico, invaded the church and killed 45 people.

The people of Acteal were members of Las Abejas, the Bees, a faith-based indigenous movement that had been founded about five years earlier.

Las Abejas are pacifists and disavow the use of violence. Yet they supported the demands of the Zapatista uprising which sought justice for the indigenous in southern Mexico. The Zapatista uprising began on January 1, 1994, the day when NAFTA, the North American Free Trade Agreement went into effect – thus protesting not only the practices of the Mexican government but also the demands for “free trade” which came from the US.

Las Abejas still exist and affirm their faith, their pacifism, and their militant call for justice for all, especially the indigenous.

They are just a few of the “wretched of the earth” who seek to put into practice today’s lectionary readings, not only Mary’s canticle, the Magnificat, cited above, but also  the song of Hannah who defiantly prayed:

The Lord makes poor and makes rich,
he humbles, he also exalts.
He raises the needy from the dust;
from the dung heap he lifts up the poor,
To seat them with nobles
and make a glorious throne their heritage.
1 Samuel 2: 8

Las Abejas, as well as Hannah and the Virgin Mary, challenge us, as persons and as nations:

This Advent, will we put ourselves on the side of the poor whom God exults or will we cling to our wealth and power?