On December 8, 1977, Sister Alicia Domon and Sister Leonie Duquet, French sisters,  Religious of the Foreign Missions, were disappeared, with twelve other women, as they left the church of Santa Cruz in BuenosAires. These sisters had been working in solidarity with the families of the disappeared in Argentina, 1977.

These women lived among the poor and were examples of the accompaniment that evangelizes that Pope Francis writes about in his recent Apostolic Exhortation, The Joy of the Gospel, ¶ 24.

Sister Alicia explained why she did what she did:

“We did not go to the villa miseria  [the shantytown] to tell people what they should do but to help one another to share the good and evil in life by taking ourselves as we were. We receive a great deal, perhaps more than we give.”

She and Sister Leonie and many others, especially women religious, are examples of what Pope Francis described

An evangelizing community gets involved by word and deed in people’s daily lives; it bridges distances, it is willing to abase itself if necessary, and it embraces human life, touching the suffering flesh of Christ in others. Evangelizers thus take on the “smell of the sheep” and the sheep are willing to hear their voice. An evangelizing community is also supportive, standing by people at every step of the way, no matter how difficult or lengthy this may prove to be. It is familiar with patient expectation and apostolic endurance.

In her standing with the families of the disappeared, Sister Alicia saw her solidarity in terms of her faith:

“I feel in communion with so many families suffering the drama of the disappearances. We seek an answer from the Lord in the light of the Gospel. I am deeply convinced that this situation of passion is united to that of Christ and it preceded the resurrection.”

Pope Francis’s words might have been written about these modern martyrs – these French sisters in Argentina in 1977, the US women killed in El Salvador in 1980, Sister Dorothy Stange killed in the Brazilian Amazon, and thousands of women (and men) killed because they stood with the poor. They evangelized by their lives, being faith disciples, as Pope Francis might say:

The disciple is ready to put his or her whole life on the line, even to accepting martyrdom, in bearing witness to Jesus Christ, yet the goal is not to make enemies but to see God’s word accepted and its capacity for liberation and renewal revealed.

May their witness of accompaniment and their courage in the face of opposition move us to be evangelizers who stand with all those in need.

Good news for the rich

The experience of the church in Latin America has brought to the fore the preferential option for the poor which can be found in the scriptures, from the injunctions of the Torah to care for the widow and the orphan to the beatitudes where Jesus calls the poor blessed.

But what about the rest of us, the rich?

I include myself among them since I have much more than most of the people of the world and have access to more wealth and power than most of my neighbors here in Honduras. 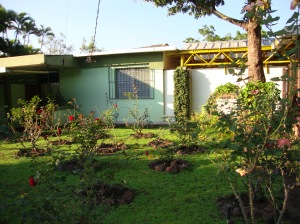 Rose garden of the UCA, where the Jesuits’ bodies were found, November 16, 1989

Father Juan Ramón Moreno was one of the Jesuits killed on this day in 1989 by members of the Salvadoran armed forces.

The Jesuits at the Central American University (UCA)in El Salvador had, like many Jesuits in Latin America and throughout the world, taken seriously the call to live out their lives in “the service of faith and the promotion of justice.” In El Salvador it meant being a university community that accompanied high intellectual standards with a critical eye on the situation of injustice in the country. Thus they could not avoid being a thorn in the side of the Salvadoran elite and the repressive government.

Father Juan Ramón Moreno – Pardito – was not one of the well-known martyrs of that night. But he had devoted his life to God and the poor and was the assistant director of the Oscar Romero Center at the UCA.

In an essay published in Jon Sobrino’s Companions of Jesus: The Jesuit Martyrs of El Salvador, he wrote about evangelization, being good news to the poor. In a section on the dilemma of the rich he wrote words that we who are not poor should take to heart:

“Basically the poor are impoverished due to hoarding and exploitation by the rich; and the rich are enriched at the cost of the impoverishment and misery of the masses. To free the poor by giving them access to living conditions consonant with their dignity as human beings and children of God entails sacrificing the privileges of wealthy oppressors. Hence, when faced with the news that the Kingdom of God is coming, the rich feel challenged and called to accept God’s justice and kindness, by allowing themselves to be re-created and changed by that justice into brothers and sisters, and persons in solidarity. ‘Be converted and believe the good news’ (Mark 1:15). Only conversion, metanoia, change of mentality, new eyes in order to see reality with love in solidarity with which God sees it, can enable the approach of the Kingdom to ring out as good news in the ears of the rich — conversion to God who comes in gratuity and kindness to remake things, the God of the Kingdom.”

The good news for us who are rich is conversion, expressed in solidarity.

That is the best starting point in working for the Reign of God and being good news to the poor. And it is, I believe, one of the ways in which God saves us.

Tagged Martyrs of the UCA

Evangelizing as Jesus did

There’s a beautiful description of evangelization in Anselm Grün’s  “Jesus the Story Teller” in  Images of Jesus, p. 131:

The art of Jesus is that he doesn’t constantly utter the word God and proclaim every possible doctrine about God. Rather, he talks to people in such a way that God dawns in them. When Jesus tells stories, his hearers are as it were created anew. They find that they are transformed by God’s grace.

As I look at the way I try to “teach,” I try to find ways that God may dawn in the people – not talking at them, but exploring with them what God is doing with us.