Today the Vatican announced the recognition of ten martyrs of Guatemala, including three Spanish Missionary of the Sacred Heart priest. They and seven lay Guatemalans were martyred in the midst of the terror of the early eighties. I am very glad that the Vatican is acknowledging a few of the thousands of lay Guatemalans martyred for their commitment to their faith. 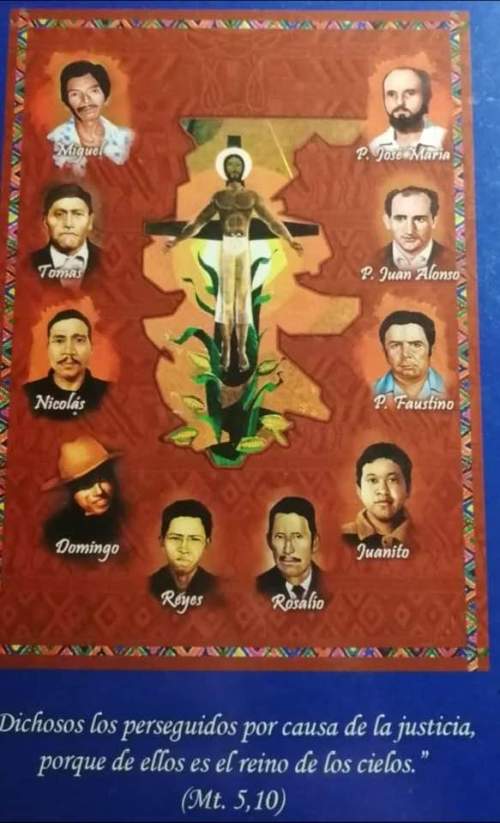 Many years ago I found a book on the priests. Here are a few quotes from them. 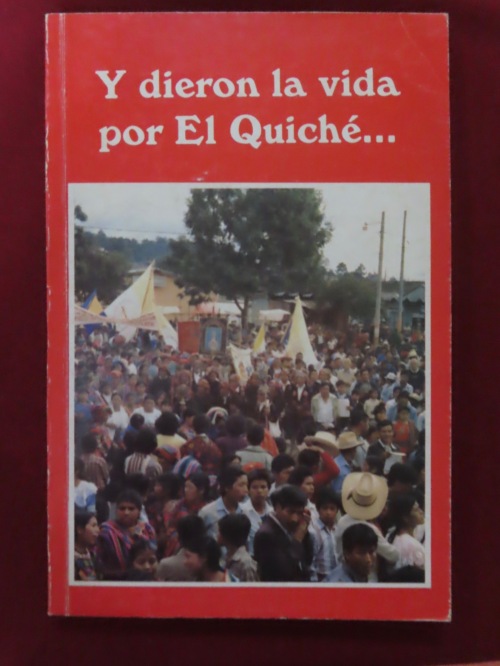 “I am finding out what Christmas is. It is that God came among human beings to give meaning to all of them, principally the poorest and those disillusioned with life, to give them hope. This is what I am coming to understand more and more every year that I am in contact with the peoples of Quiché. They help me live the hope and joy which Jesus brings.”

“In no way do I want anyone to kill me; but I am not at all ready, out of fear, to shrink from being present among these people. Once again I now think: ‘Who can separate us from the love of Christ?’” (in a letter to one of his brothers)

“One of the attitudes which most impresses me about the personality of Jesus Christ is his total availability to his Father and to all people. After that, his freedom in the face of the formalities, the ideologies of his time, the persons, the powers, the interests.”

“We cannot leave the people abandoned. The situation is very bad.”

Martyrs of the Quiché, pray for us.

Today the Church celebrates the Epiphany of the Lord (even though the official date is January 6.)

The word epiphany has taken on wider meaning in our culture – almost any revelation of the transcendent, of the meaning of things which suddenly becomes apparent.

The most well-known use of the term “epiphany,” in my mind, is the Epiphany of Thomas Merton on the streets of Louisville, Kentucky, on March 18, 1958. In Conjectures of a Guilty Bystander, he wrote:

In Louisville, at the corner of Fourth and Walnut, in the center of the shopping district, I was suddenly overwhelmed with the realization that I loved all those people, that they were mine and I theirs, that we could not be alien to one another even though we were total strangers. It was like waking from a dream of separateness, of spurious self-isolation in a special world, the world of renunciation and supposed holiness. The whole illusion of a separate holy existence is a dream. Not that I question the reality of my vocation, or of my monastic life: but the conception of “separation from the world” that we have in the monastery too easily presents itself as a complete illusion: the illusion that by making vows we become a different species of being, pseudo-angels, “spiritual men,” men of interior life, what have you.
… we are in the same world as everybody else, the world of the bomb, the world of race hatred, the world of technology, the world of mass media, big business, revolution, and all the rest. We take a different attitude to all these things, for we belong to God. Yet so does everybody else belong to God. We just happen to be conscious of it, and to make a profession out of this consciousness. But does that entitle us to consider ourselves different, or even better, than others? The whole idea is preposterous.
This sense of liberation from an illusory difference was such a relief and such a joy to me that I almost laughed out loud. And I suppose my happiness could have taken form in the words: “Thank God, thank God that I am like other men, that I am only a man among others.”…
It is a glorious destiny to be a member of the human race, though it is a race dedicated to many absurdities and one which makes many terrible mistakes: yet, with all that, God Himself gloried in becoming a member of the human race. A member of the human race! To think that such a commonplace realization should suddenly seem like news that one holds the winning ticket in a cosmic sweepstake.
I have the immense joy of being man, a member of a race in which God Himself became incarnate. As if the sorrows and stupidities of the human condition could overwhelm me now that I realize what we all are. And if only everybody could realize this! But it cannot be explained. There is no way of telling people that they are all walking around shining like the sun.…
Then it was as if I suddenly saw the secret beauty of their hearts, the depths of their hearts where neither sin nor desire nor self-knowledge can reach, the core of their reality, the person that each one is in God’s eyes. If only they could all see themselves as they really are. If only we could see each other that way all the time. There would be no more war, no more hatred, no more cruelty, no more greed…I suppose the big problem would be that we would fall down and worship each other. But this cannot be seen, only believed and “understood” by a peculiar gift.

This past year I have received three such gifts, when I have almost been close to tears.

The first was at the parish Christ the King celebration.

After the Mass, a tradition is to carry the monstrance with the consecrated host through the crowd, while praying and singing. Many seek to touch the monstrance, seeking a tactile connection with Jesus. Padre German began the procession through the crowd and then invited me to carry the monstrance. As I walked through the crowd, many came close – women of all ages, men, children, young people, frail elderly women. I had a very strong sense that people were come in their pain, in their suffering, in their need and bringing them to the Lord – maybe seeking to tough Him as the woman with the flow of blood sought to touch the hem of his garment (Matthew 9: 20-22). Recognizing the pain of the people I was close to tears.

The second time was at the 9 pm Christmas Mass in the Dulce Nombre church. After Communion, Padre German had me take the image of the Baby Jesus and process down the main aisle of the church to place it in the manger scene at the back of the church. As I carried the infant, I did not focus on getting to the manger. I moved the image so that it could be seen, face on, by the people in the pews. Again, I had the sense of Jesus being present to the people there.

The third time was yesterday at the diocesan Mass for the World Day of Peace. As has happened several times when distributing Communion at diocesan Masses, I found myself moved as I placed Jesus on the tongue or in the hand of those who approached to receive. So much faith and so much desire for Jesus brought me, again, close to tears.

Were these my epiphanies, the ways that Jesus is showing Himself to me to encourage me and deepen my faith?

I don’t know. But something is happening.