It was about 11 am on July 25, 1980. They were meeting in the unfinished church in Caserío Los Leones, Platanares, Suchitoto, El Salvador –  a seminarian, Othmaro Cáceres, and thirteen young men.

The chapel in Los Leones, where Othmaro Cáceres and thirteen young men were killed.

Othmaro was to be ordained in a few months for the neighboring diocese of San Vicente.  He was from Platanares and often would return from his studies in Mexico. His brother noted how he would help with the labors, like any other campesino, milking cows and working with a cuma in the fields. The young people in the area looked up to him. 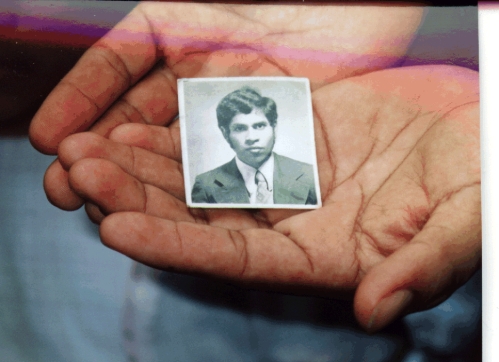 Photo of Othmaro Cáceres inthe hands of a family member.

The young people had taken a break in their meeting and were in the church, sharing candy, but Othmaro was outside. They were talking about their lives as well as about the construction of the new church building. They may have also been talking about plans for Othmaro’s ordination.

Othmaro had just left the chapel when Ventura’s troops arrived, coming from two sides – the road and the fields. He heard shots and hid in the grass. When he thought the troops were gone, he entered a nearby house. But they had not yet gone and caught him there. “You’re the one we’re looking for,” they said and accused him of being a guerrilla leader. He asked them to wait a bit and went down on his knees. He asked God for forgiveness and was then shot. They then attacked his body with machetes. He died of several shots in the chest; afterwards his head was destroyed by blows of a machete.

The other young people were also killed.

This massacre is one of many that happened in El Salvador in the 1970s, 1980s, until the end of the civil war in 1992. Many like Othmaro Cáceres were people of faith, martyred for their commitment to God and the people. Others were like many of the youth killed with him. Some were very involved with the church. A few may have been allied with the opposition forces but most were probably sympathetic to the opposition. Some of them were probably active in their communities, perhaps building underground shelters for friends and family to provide some shelter when the government bombed the area or initiated military incursions into the region.

In the midst of this, they had come together with a friend in walls of a structure they were building to be a House of God in their community.

Victims of war and oppression by a government that had the backing of the US government. But their faith, their resilience can give us strength – as the forces of evil still roam this world.

Procession to the site of the massacre for a memorial Mass,about 2001.

This entry was posted in Uncategorized and tagged José Othmaro Cáceres, martyrs, Suchitoto. Bookmark the permalink.