whoever wishes to save his life will lose it, but whoever loses his life for my sake will save it.

Holding on to ourselves closes us in and so we die; but letting go of ourselves, losing control, handing ourselves over, can open us to new life.

But there’s another paradox I’d like to share today, the anniversary of the death of A. J. Muste in 1967 at 82 years of age.

“One has to be both a resister and a reconciler to be an effective pacifist. You have to be sure that when you’re reconciling you’re also resisting any tendency to gloss things over; and when you’re primarily resisting, you have to be careful not to hate, not to win victories over human beings. You want to change people, but you don’t want to defeat them.”

Paradoxes teach us that it is not always black and white – and that doesn’t mean that everything is grey. For me, it means that the truth is found in the ongoing dialogue, the ongoing paradox, the living in the midst of paradox and ambiguity.

AJ Muste seems to me to be one who lived with conviction – but int he midst of paradoxes.

Abraham Johannes Muste, born in the Netherlands, was raised in Michigan. After college he taught for a few years at what is now Northwestern College in Orange City, Iowa. After seminary he served for several years as a minister of the Reformed Church. He would subsequently pass through several denominations, before joining the communist Workers Party.

After several years he returned to a faith based on the Sermon of the Mount and advocated an activist pacifism. He was for several years the executive secretary of the Fellowship of Reconciliation, an interfaith pacifist organization.

When he retired from that role, he continued to be an advocate for justice, peace and nonviolence – protesting nuclear weapons, the Vietnam War, and the draft. A year before his death he was arrested protesting outside the US Embassy in Saigon, South Vietnam. A few weeks before his death he visited North Vietnam to see the effects of the US bombing.

One of the most striking photos of A J is his climbing over the fence at a Nebraska missile base. 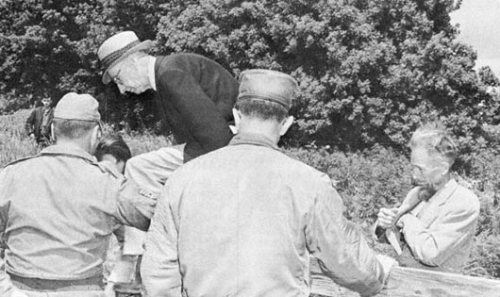 This entry was posted in Uncategorized and tagged A. J. Muste, lectionary, pacifism, peace, peacemakers. Bookmark the permalink.