Today is the feast of the dedication of the Basilica of Christ the Savior and Saints John the Baptist and John the Evangelist – more commonly known as St. John Lateran, the pope’s cathedral.

It’s an impressive church and probably the major basilica I most appreciated when I visited Rome in February 2013. St. Peter’s felt more like a mall than a church; St. Paul’s outside the walls was almost deserted when I visited; St. Mary Major does house what is called the manger, but except for some mosaics it didn’t move me.

But there was something about St. John Lateran that struck me.

Maybe it was because I went to Mass there and it felt like a place of prayer. 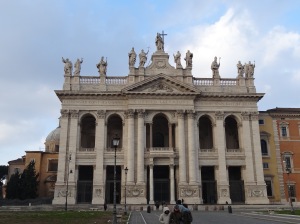 Maybe it was the apse mosaic with the small image of St. Francis of Assisi beside the image of Mary. 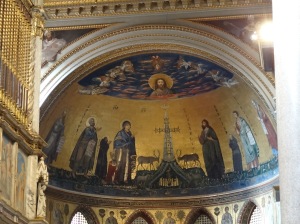 Or maybe it was the sculpture of St. Francis and his companions across the park, facing the church. In the Lateran palace Francis sought the approval of his new order of mendicant friars. The pope was probably a little reluctant to accept this strange group, but he had a dream that the Lateran church was falling down and a strange guy, whom he later recognized as Francis, sustained the church. 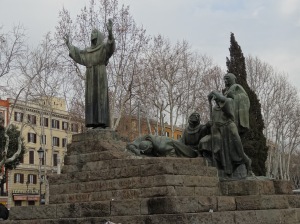 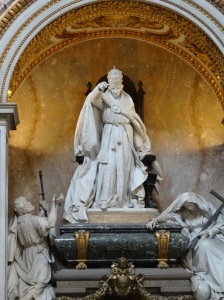 Maybe it was the tomb of Pope Leo XIII with its triumphant statue of the pope who initiated the modern era of Catholic social thought with his encyclical on labor in 1891, Rerum Novarum.

Maybe it was the nearby baptistery with an image of the deer seeking living waters. 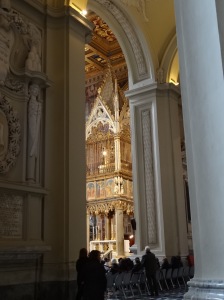 But then it might just have been because God and the people of God were present at worship.

This is what I thought of this morning as I read from a sermon of St. Caesarius of Arles in Benedictine Daily Prayer:

We celebrate the birthday of this church, dear brothers and sisters, with a joy that pleases Christ. Yet, remember that we ourselves must first be God’s true and living temple. Nonetheless, Christians rightly keep the anniversary of Mother Church, who has given them spiritual rebirth….
If then … we want to celebrate the birthday of a church with real joy, we must avoid destroying by sin the temples of God which we ourselves are.

This entry was posted in Church and tagged St. John Lateran. Bookmark the permalink.