Deacon servant of the Reign of God 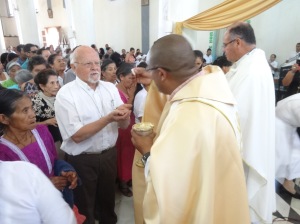 Yesterday when I was in line for the procession at Mass in Dulce Nombre, Padre German who was being installed as pastor whispered to me about my being accepted as a candidate for the permanent diaconate at the same Mass.

For the Reign of God – in the spirit of Monseñor Romero.

This isn’t about me; it’s about the Reign of God.

And it’s about doing it as a member of the Servant Church, a Church that is diaconía.

As Romero said in his speech at Louvain, February 2, 1980, less than two months before his martyrdom,

The essence of the church lies in its mission of service to the world, in its mission to save the world in its totality, and of saving it in history, here and now. The church exists to act in solidarity with the hopes and joys, the anxieties and sorrows, of men and women [Vatican II, Gaudium et Spes, ¶1]. Like Jesus, the church was sent “to bring good news to the poor, to heal the contrite of heart…and to seek and to save what was lost “ (Luke 4: 18; 19:10).

The witness of Monseñor Romero has challenged and sustained me, offering an example of a person committed to God and to the poor.

It’s not one or the other – it’s both and more.

May I have the courage to go forward on this journey – and walk the way of self-emptying to be a servant (Philippians 2).

This entry was posted in deacon, Monseñor Oscar Romero. Bookmark the permalink.