Rather dead than a bishop 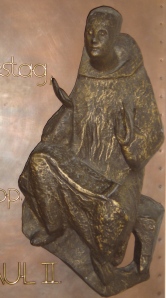 Yesterday was the feast of St. Albert the Great, a great philosopher, scientist, and theologian. For him, no aspect of knowledge could not be recognized by a reasoned faith.

As a Dominican master of studies he taught the young Dominicans. One of his students was Thomas Aquinas, whose quiet disposition and body size had earned the name of “The Dumb Ox,” among Thomas’ fellow students. (Nastiness of students to each other is not a new phenomenon.)

St. Albert, though, rightly prophesied that “the lowing of this dumb ox will be heard throughout the world.”

Albert was later chosen to be bishop of Regensberg – a post he held for about two years. It was too much for him.

Today a Benedictine priest friend of mine, Father Albert, sent me this quote that Blessed Humbert of Romans, the Master of the Dominicans, wrote to Albert the Great about his elevation to the episcopacy:

“I would rather you were dead than a bishop…  Why ruin your reputation and that of the Order by letting yourself be taken away from poverty and preaching?  However troublesome you find the brethren, don’t imagine things will be better once you have secular clergy and powers to deal with … Better to be in a coffin than sit in a bishop’s chair!”

I could not stop laughing when I read it. St. Albert should have listened to Master Humbert.

It got even more hilarious when I discovered that the quote was cited by the new Archbishop of Sydney, Australia, Anthony Fisher, O.P., in the homily of his installation Mass on November 12.

We need more bishops like him. And we would have a better world and a better church if we would be able to laugh at ourselves.

This entry was posted in doctor of the church, Dominican, saints and tagged St. Albert the Great, St. Thomas Aquinas. Bookmark the permalink.