Saturday I attended the priestly ordination of two men I knew when I was a campus minister at St. Thomas Aquinas Church in Ames, Iowa. 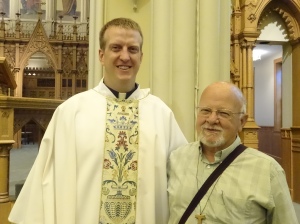 Sunday I attended the first Mass of Father Mark Murphy in Marion, Iowa. There were about 37 priest concelebrants and Mark had asked me to do the second reading.

I, Paul, am already being poured out like a libation, and the time of my departure is at hand.

However, I remember another translation:

I, Paul, am already being poured out like a libation and my death is imminent.

Did Mark have some knowledge of the future that I was unaware of?

Whatever his intentions, he gave a beautiful homily.

He commented on the image of God and humans in the center of the ceiling of the Sistine Chapel, which he may have seen several times, having studied for four years at the North American College in Rome.

He commented how it presents an image of God creating humans with a touch – in a most majestic way. That is what most of us want – grand moments in which God touches us.

But in the first reading, Acts 12: 1-11, an angel wakens Peter in prison, tapping him on the side. Isn’t that the way that God often touches us, Mark noted –  with a slight touch?

But are we always willing to awaken to this subtle call of God? Peter thought he was dreaming until he was alone in an alley.

The challenge is to be aware of the taps of God on our side.

This entry was posted in lectionary. Bookmark the permalink.